Ventoy is a great and handy bootloader that supports booting multiple file types including VHD(x).

However, I could not get it to work for Bitlocker encrypted VHDXs, if the disk is encrypted, the windows boot manager complains about not finding winload.exe.

So the workaround here is to do native VHDX boot from the Windows Boot Manager that is directly booted from UEFI without using Ventoy. In essence, when the UEFI Firmware starts, we have two entries, one to boot into Ventoy, and the other to boot the windows bootloader which can handle encrypted VHDX properly.

However, the original EFI partition that Ventoy creates is too small to fit the windows EFI files and we can not control its size.

What we can do instead is redesign the partition layout and create our own EFI system partition. When we first install Ventoy, we can instruct it to preserve some space at the end of the disk.

Then we need to create an EFI System partition which will hold the windows boot files. Right-click on the unallocated disk space > New Simple Volume. We need to format the partition as a FAT32 filesystem.

(Important) We now need to mount the VHDx file so we can later tell bcdboot where the windows directory is to copy the files to the EFI partition in the next step.

Now in a command prompt:

"D:\Windows" is the windows directory inside the VHDX file. Substitute for the correct drive letter.

"E:" is the newly created EFI partition that will hold the EFI files. Substitute for the correct drive letter.

Success! We can now boot bitlocker encrypted VHDXs and have ventoy installed on a single disk. 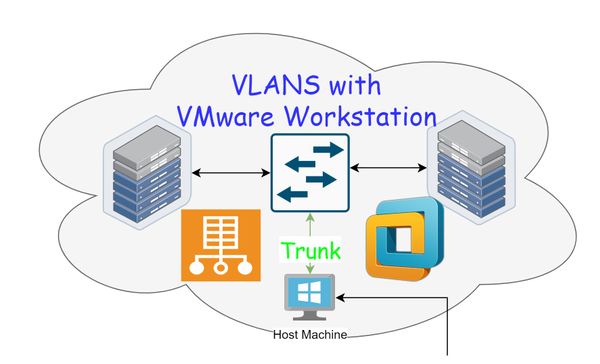 VMware Workstation does not support handling of VLANS natively. However, there are workarounds that can be used to provide vlan tagged traffic into VMs.